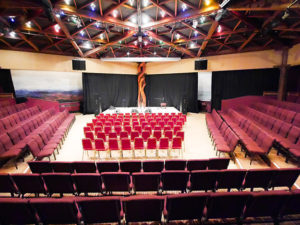 the Findhorn Foundation Community) in the ten years from 1974 to 1984. Its basic shape is a pentagon and, at its heart, is an auditorium that will seat 300 people comfortably and up to 400 with extra seats on the wooden floor. The Auditorium is primarily used for music, drama, dance and mixed media shows and makes a great conference venue.

From the exterior you can get a good view of the glass roof lantern, again pentagonal in shape, giving the building a highly unusual outline. Located at the edge of a sand dune/wilderness area, the Universal Hall was built to be the theatre, conference centre and meeting point for the Findhorn Foundation and Community.

In 2003, The Waterboys recorded an album here and named it after the Hall. See this link for details https://en.wikipedia.org/wiki/Universal_Hall

sides in individual seats. The seats can be removed to create an increased dance area or for conversion to a TV studio. Video and slide projection are available onto a permanent cinema-sized 5 metre wide screen. A full theatre lighting system is controlled by a Strand 200 48-channel mixer with FX. Total Blackout possible.

The sound system in the Hall includes:

There are 7 monitor wedges, 2 powered and 5 passive. The sound desk can support 4 mono mixes and 3 stereo mixes.

There is a Steinway Boudoir Grand piano. We have a q build staging system. The auditorium also contains two of the largest oil canvasses in Europe, specially commissioned works by the late N Haydn Stubbing.

Our lighting plan is currently changing as we add new lights. We will post details here soon.

The lighting rig is accessed by a skywinder from the floor and a long ladder from the seating area. The Universal Hall does not have a resident lighting technician. The lighting desk can be moved from the lighting booth to a table adjacent to the sound desk.

The dance and drama studio has a sprung floor, exercise bars on three walls and floor-to-ceiling mirrors on the fourth, sound equipment, plus changing rooms with showers. It is used for a variety of classes including contemporary and traditional dance, drama and yoga. Further down the corridor, a music practice room with upright piano and percussion instruments is available for classes, rehearsals and general use by community musicians of all levels of ability.

Located at the front of the Universal Hall. Interior and exterior seating in the café with a south facing terrace next to a rock garden with water feature. There is a range of cakes and pastries, cappucino machine, selection of vegetarian light lunches, good range of herbal teas. Organic beer and wine available during public performances. Open to the public daily 7 days a week and some evenings in conjunction with performances in the Hall auditorium.

The walls of the café and the upper foyer are sometimes offered as art exhibition space and exhibitions are bookable by arrangement. The manager of the Phoenix Store (which owns the café franchise) should be contacted on 01309 690110 regarding the cafe walls and the Universal Hall Manager contacted on 01309 691170 about the upper foyer wall space.

Universal Hall Promotions is supported by : 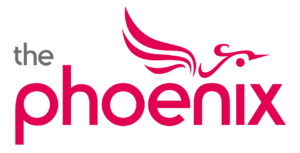