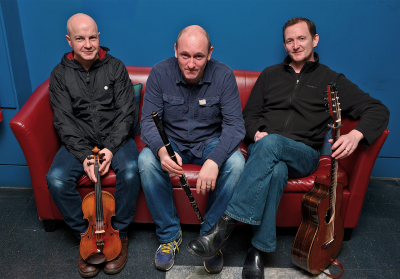 Michael McGoldrick, John McCusker and John Doyle – Name a more iconic trio… I’ll wait. First jamming together as teenagers, a quarter century later these Celtic folk heroes are still combining forces to share music with the world. Releasing two studio albums in the last three years, The Reed That Bends in the Storm (2020) and The Wishing Tree (2018) combine traditional, contemporary, and original instrumentals and songs of varying speeds, feels and flavours. Each having undertaken many other musical projects in the past, these veteran musicians have played with the likes of Bob Dylan, John Cale, Joan Baez, Eddi Reader and Paolo Nutini.

McGoldrick is first-class in flutes, whistles and Uillean pipes. McCusker, one of Scotland’s foremost fiddlers, is also an accomplished producer and composer. Doyle, a giant of Irish traditional music who helped found Solas, brings with him powerful rhythmic guitar and confident vocals. The feeling of watching these three play is that of old friends having a great time together. The intimate Universal Hall is the perfect setting for them.

[There will be no social-distancing at the event, but everyone attending must wear a mask unless exempt. Masks can only be removed when drinking water. NHS COVID Passes are not required for admittance to this event.]

The Phoenix Café will be open 30 minutes before, and during the interval of this gig.